The Testimony of Paco 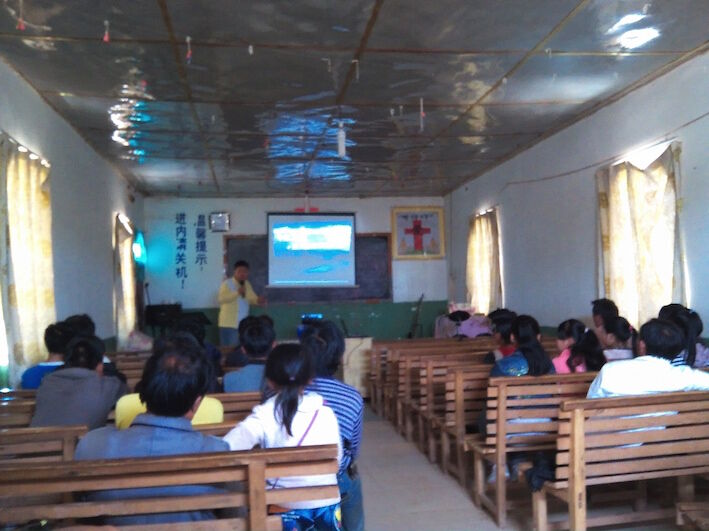 Paco* is the founder of a small bible training school in China. His school is located in his own village, among the Miao minority tribe in China. Paco shared with Hua*, OM China’s Short-Term Mission Co-ordinator, how God led him into this ministry despite facing many challenges along the way.

In the year 2000, Paco graduated from his high school but he had to forgo his chance to pursue his university studies because his parents are farmers in their village and could not afford to pay his tuition fees.

As a result, Paco fell into depression and even thought of committing suicide as he felt that there was no hope in his life.

“My heart was empty. I tried to fill my emptiness with smoking, drinking and gambling,” shared Paco.

This reckless lifestyle lasted for two years. Nothing could satisfy him. But Paco’s elder brother did not give up on him. For three years, he and his church prayed earnestly for this lost younger brother. God did not give up on Paco either and answered their prayers.

In 2003, Paco finally repented and set his mind to serve God. He began to look for opportunities to equip himself.

After one and a half year of theological training in his church, he moved to northeast China in 2006 to complete another course in an underground Bible school.

Paco desired to become a missionary. He set his eyes on Laos and Myanmar as he has heard that there were some Miao people doing many evil things in these countries. Paco felt the calling to go and accepted an invitation from a pastor in Myanmar to work with him.

On the day before he was due to depart for Myanmar, Paco’s mother-in-law called him and told him, “The church has trained you and expects you to stay and minister to our own people, and your son needs you as well.”

Paco has a little boy who suffers from a type of blood disorder and the doctors could not identify the cause. His son was bleeding again at the time when his mother-in-law called.

Struggling to make a decision, Paco knelt down to pray.   At midnight, he heard a clear voice that said to him, “Turn back and see your own people who live in darkness, early marriage, illiteracy, low education and no faith.’  God then presented a picture before him.  Paco saw his fellow Miao people’s faith decayed after going out of their villages to earn a living.  He felt sorry and hurt to see that these young people have nothing to do or live a wasted life like he did in his younger days.

Paco then prayed to God, “If You want to use me even though I am a nobody, I will obey whatever You ask me to do. Please change me as You please. I’d like to devote my whole life to serve those young people so that they may grow in You. Even if there is only one single lost soul. I will rescue him for You.”

This was how Paco started his school. He labored alone initially, without any co-worker. He acted like a father and mother to his students. It came to a point that he almost broke down from sheer exhaustion. He realized that he could not continue to work alone like this.

Paco prayed to God for more workers. He knew that it would be hard to fulfill this urgent need. At that time, he does not have any financial support for himself but he was able to get by. Paco prayed, “If I have more co-workers, they have families, how can they survive without a salary? God, You have to provide their basic needs at least.”

Growth in his ministry

Paco trusted God and knew that His provision is sufficient for him. Soon, God brought a few workers to him. One of them became his main co-worker and now they teach the students basic biblical lessons together. There are another three teachers who visit the school once a week to teach musical instruments. Paco realized that besides theological lessons, their students need to be trained in some life skills, such as farming and use of computers, etc.

Paco also had to deal with a few unannounced visits made by the local police and religion bureau officers. He was not afraid as God gave him the right words to respond each time and nothing serious had happened from these visits.

Paco’s school does not have the facilities of an established bible school and many of his students are also not qualified to attend a regular school. However, Paco told the church and the parents “If your children have the heart to serve the LORD, no matter in what way, we will accept and will train them.”

After several years in operation, more churches now recognize the school, and they are willing to send their children to his school. At the latest (third) intake, they received 28 applications but due to the school’s limit resources, 10 children had to be turned away.

The school offers only very basic biblical training for these young children. After two years’ of training, Paco respects the children’s decisions, according to the vision that God has put in them. For those who want to continue to be trained, he will introduce them to other training centres in bigger cities to get further training. If they have a passion for Sunday school, he will help them to be trained as Sunday school teachers for their own church. Or if they want to be a “missionary” with a chosen trade, he will introduce some Christian business people to them. Due to their cultural background, all these young children are able to endure hardship.

Need for a new classroom

Currently Paco and his team are praying that God will provide a bigger classroom which could accommodate up to 30 students. The present classroom is too small and dark.

Paco has exchanged a piece of land next to their current classroom and church with the local villagers, and they hope to raise enough fund to build a new one. This way they can accept more students from age 15-22 who must satisfy two key requirements i.e. recommended by the church and at least one of the parents should be a believer.

Beginning this year, Paco has decided to charge each student 50 RMB/month (or 8 USD/month) so that the children know that they have paid a fee and will take their studies seriously. Besides classroom learning, the teachers and students also work together in the field. They try to be self-sustaining by planting rice, raising pigs and other farming activities.

As most of the Miao students do not know how to speak and write in Chinese, Paco has opened a Chinese class for them. The school curriculum also includes Basic Biblical Training, Systematical Theology, worship and Sunday school. There are plans to teach topics like Introduction to Old and New Testaments and preaching.

Paco and his team basically rely on God to provide for the running cost of the school and His provision is never late. Currently each student’s living expense is 130 RMB/month (or 20 USD/month). Through their hard work and some support from a local brother, they manage to make ends meet.

The school is currently located in a village of which 80% of the villagers are believers. They have also formed an evangelistic team and wherever there is a need, they will go.

Reaching out to others

Recently this village has reached out to another minority group and helped them to plant a church in one of these villages. Praise God that Paco and other villagers have raised a total of 58,000 RMB (equivalent to 9,200 USD) to build this new church.

OM China is currently working with Paco in several areas, which include provision of some livelihood skills for his students and reaching out to the target minority group.