A visit to the Kumamoto earthquake disaster area 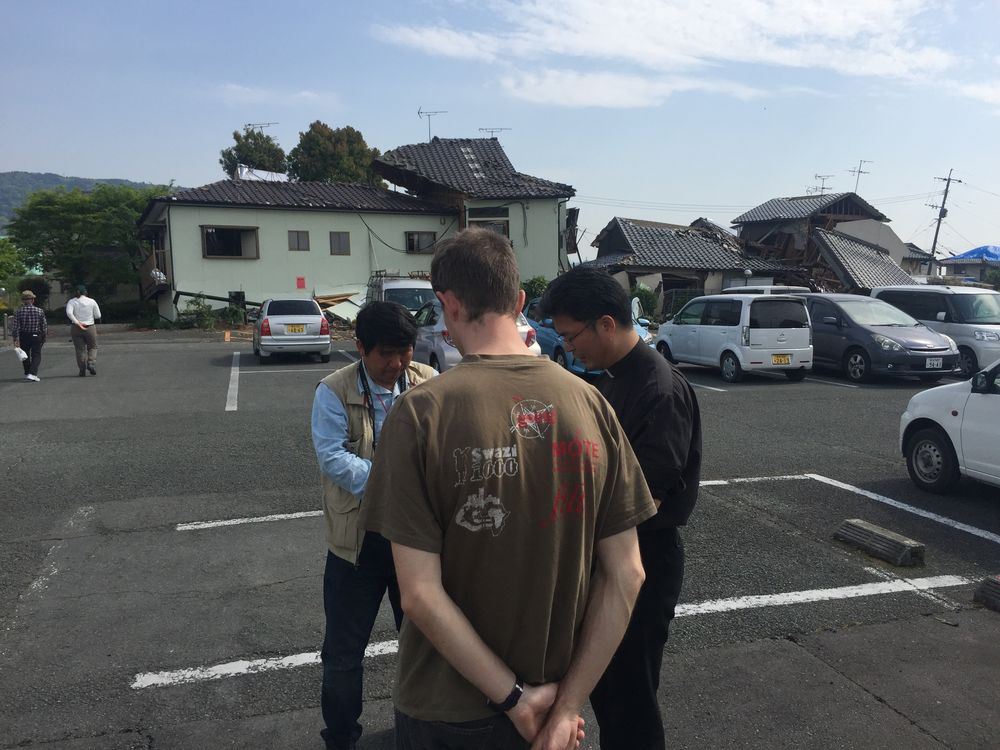 On Sunday evening of April 17, the day after the earthquake in Kumamoto, Stephan’s phone rang. Two pastors of Tohoku Help, a church network born out of the relief work following the Tohoku earthquake and tsunami, invited Stephan Smithdorff, leader of OM’s team in Miyagi to help them take relief supplies to churches in Kumamoto prefecture. Another purpose of the trip was to visit churches in the area in order to assess their needs, and to help with establishing a Christian relief network there.

It took Stephan and his teammate Hanno two full days to journey from Miyagi to Kyushu. “As we drove through Japan we were reminded of God’s beautiful creation, and yet when we arrived on Kyushu Island we once again saw how fragile creation can be,” Stephan said, pointing out the extent of damage that the two strong earthquakes had caused. It didn’t just affect buildings and infrastructure, but had also taken human lives and injured many more.

One of the churches they visited was Kumamoto East Christ Bible Church - or what was left of it, because the second floor of the building had collapsed onto the first. It was only by a miracle that the Pastor’s daughter was rescued after being trapped under the debris for 5 hours; other neighbours died in the disaster.

“What impressed us the most was the willingness and determination of the Japanese pastors to help in any way they can,” Stephan remembered. “Even though they were heavily affected, many pastors wanted to help to meet the needs in their communities.” The needs, however, kept on changing. When the two OMers arrived, they brought some water, because most of Kumamoto was without water supply for four days. Everybody asked for water. However, the very next day the water came back on, and everybody had enough water to drink and for daily use.

But the needs are still real. Daily aftershocks stir anxiety about possible further earthquakes. There was a fear of volcanic eruptions in Kyushu Island, which might lead to another nuclear disaster like in Fukushima. Although it seems that tremors have subsided, the earthquakes left 48 people dead and more than 30,000 houses have been destroyed or severely damaged. According to latest news, the prefectural government is struggling to provide enough temporary housing and reconstruction is going slow.

It is important for the churches to have a voice during these uncertain times and to come alongside earthquake victims in their suffering. By connecting with each other, strong networks are being established and churches are starting to help the community in practical ways. This is the beginning of a long road to recovery. Maybe it won’t take as long as in Tohoku, but for at least a year, churches will be dependent on outside help.

OM Japan’s leadership is currently assessing the best way to come alongside local churches and support their relief efforts. While OM does help with raising and transferring of funds within Japan, it currently doesn’t see the need of requesting financial help from outside the country. But please do pray for Japanese churches' and OM’s efforts in helping those affected, and asking the Lord for a quick recovery.