Blast from the past - Bus4Life Romania 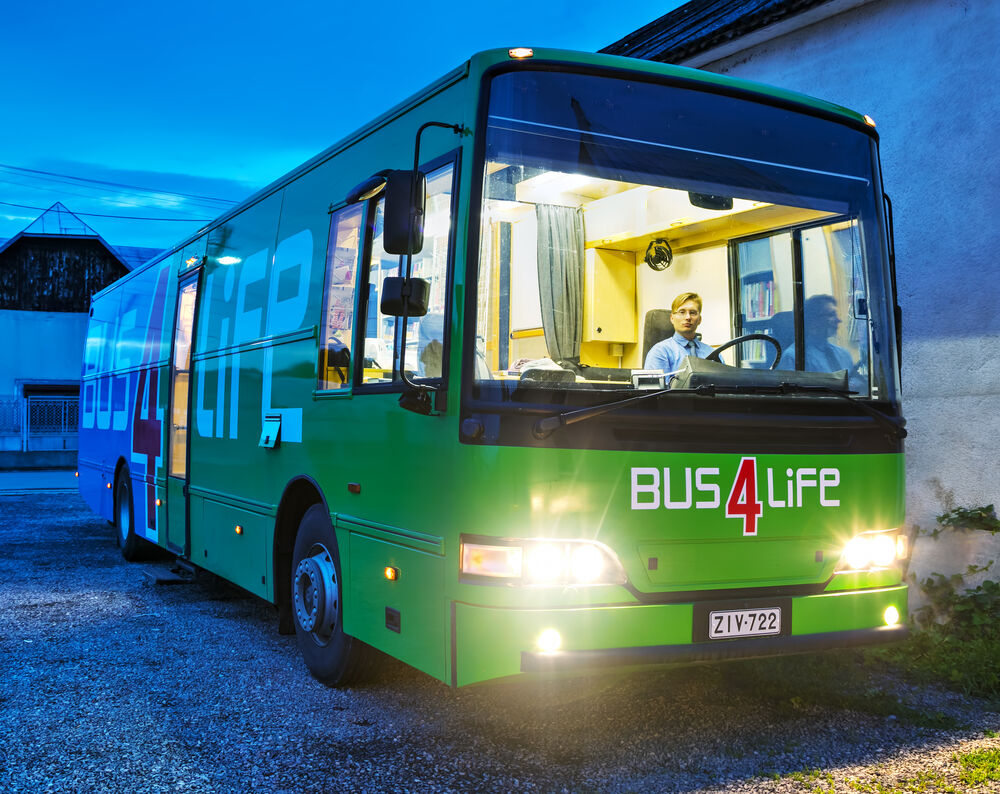 OM has worked in Romania for a number of years. Bus4Life coordinator Esko Mäki-Soini (FIN), recalls smuggling bibles into the country before the 1990 revolution, as well as many visits after the Communist era. Two surprises awaited him on the last trip:

Fruit from the past

One town holds special memories for Esko Mäki-Soini and bus driver Esa Tuuri (FIN). In fact, this is where Esko had worked for many years alongside the local pastor during the time of persecution.

“Pastor Viktor was one of our contacts who faithfully received and distributed the Bibles and literature we secretly brought in,” recalls Esko. “And in 1990, after the revolution, we did an outreach here together with Viktor. As a result, a number of orphan girls received Jesus as their Saviour.” Later, when they turned 16 and had to leave the state orphanage, pastor Viktor and his wife opened their home for many of these girls.

“We could never have imagined at the time that 26 years after the girls accepted Jesus they would be volunteering for a Bus4life outreach in their town!” smiles Esko, “and even if it was raining when we arrived, these young ladies faithfully stood out in the rain and invited people to come inside the bus.”

Shadow from the past

In Romania, the Bus4Life team offered free blood sugar and blood pressure checks. This proved quite popular and also provided an opportunity for distributing invitations to the Sunday Service at the nearby church.

When the bus opened for visitors, a slightly drunk man came inside to have his blood pressure checked. Marius* began a long conversation with Pastor Viktor and then left. A few hours later he returned to the bus asking to have his blood pressure checked again since he felt the workers had lied to him about the results. There was very little difference in the results and it soon became obvious the real reason for his return was to continue the conversation with Viktor.

“Who is this man?” Esko wondered, and Pastor Viktor explained how during Communism, Marius had been the Chief of Police in their town and after the revolution became a judge. He had lived across the street from Viktor during those years.

As they were talking that day on the bus, Marius had said when he dies he only needs a hole for his body to be thrown into; he did not believe there was anything else after death. Being a bit drunk, Marius had admitted to Viktor that during the years of Communism he had watched and monitored Pastor Viktor and his activities. This came as no surprise to Viktor because they lived near each other and it was common practice back then. Marius had not caused problems for him but as Chief of Police he was required to inform his superiors about the pastor.

Marius’ wife had become a believer after the revolution and joined a local church. When their daughter got married, he had refused to go to the wedding because it was conducted in a church. Yet Marius had also said to his wife that if he ever became a believer, he would like to join Pastor Viktor’s church.

Viktor had been a living testimony of Christ to his former “persecutor”.

“We have an amazing God," concludes Esko, "when we think of me as a former Bible smuggler meeting with a former Chief of Police on the bus together with Pastor Viktor who has faithfully reached out all these years.”

Please pray 2 Thess. 3:1 (NIV) for the people the Bus4Life team came into contact with in Romania: “…that the message of the Lord may spread rapidly and be honoured, just as it was with you”.