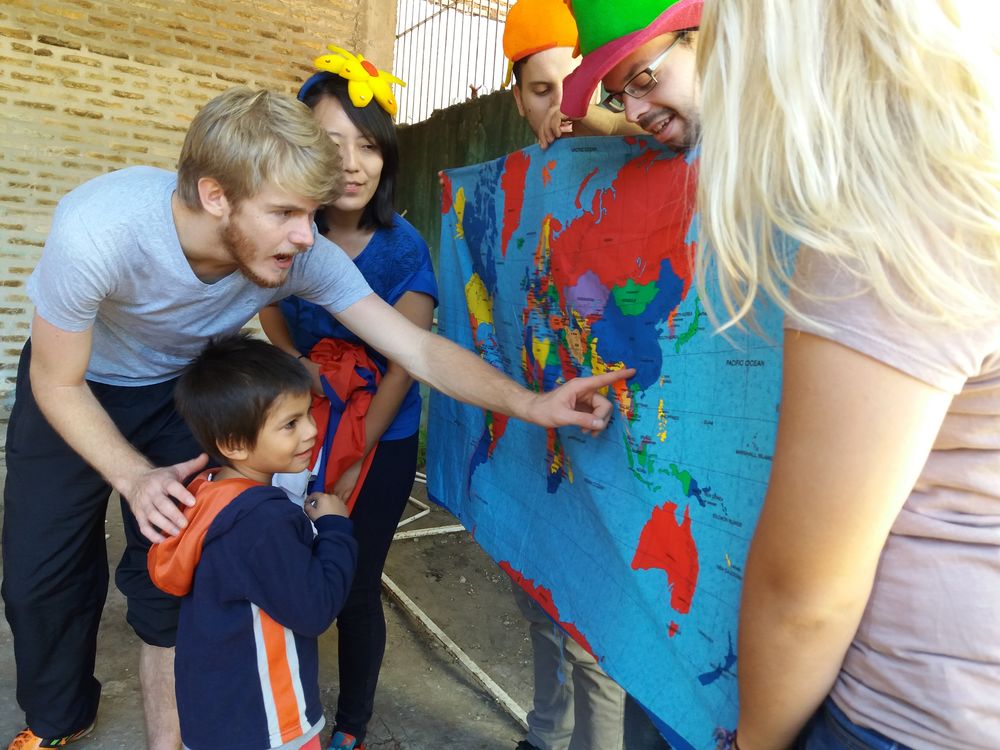 When Priscilla Isaak graduated from a university in Paraguay, she wanted to do something different. She’d heard about OM – specifically the OM Ships International ministry – from other friends but didn’t think a year at sea was right for her.

Instead, she joined the Global Action programme and spent a year in England, volunteering with OM’s Kids ‘n’ Things ministry. In the UK, Priscilla regularly presented children’s programmes at churches and schools, and, during school holidays, she helped facilitate kids’ clubs—two hours of games, arts, puppets, stories and Bible memory verses.

Back home in Paraguay, Priscilla started working as a pre-school teacher. She also kept in contact with the small OM team in Asunción, joining monthly prayer meetings and sharing about her work in England.

Eventually, she told team leader Rodrigo Vargas of her desire to start a similar children’s ministry in Paraguay. “I really felt that God was giving me the opportunity and asking me to propose a ministry and see what came out of it,” she said.

With OM’s recent global vision statement – creating vibrant communities of Jesus followers among the least reached – the Paraguay team considered how they could orient the ministry to missions.

“The goal is not just to reach out to kids and evangelise them, but to be able to share the need for missions, the important element of what missions means, to share stories of missionaries and to pray for missionaries,” Priscilla explained.

They brainstormed a plan for The King’s Messengers, the resulting ministry, a programme that would allow OM volunteers to partner with a church for four to six months. During that time, the volunteers would train leaders from the church on various aspects of children’s ministry and missions.

Next, they needed to find a church.

“In Paraguay, all relationships are important,” Priscilla said. “Everything goes through relationships, even if it’s far-away related—a friend of a friend. You still have trust if it’s a good connection.”

Priscilla eventually connected with a local pastor through Kelly and David Dominguez, fellow OMers who had joined the church after getting married. “They were the ones pushing for a children’s ministry, and the members were excited as well,” Priscilla remembered. “I brought the programme to the pastor and talked to him…It started very quickly, more quickly than we thought.”

Every Saturday from August through December, Priscilla met with several leaders from the church at around 2 p.m. to discuss the day’s topic. At 4 p.m., they would go into the community to invite the kids, aged three to 15, to the afternoon programme.

A month into the programme, the pastor’s wife told Priscilla she and her husband had been considering leaving the church. The congregation had originally been started by missionaries, but each time a new leader left, the church fell apart.

With the kid’s ministry, the pastor and his wife saw something growing again in the church, which gave them hope.

During the workshops with the leaders, Priscilla noticed one lady who always arrived on time and with lots of enthusiasm and energy. After she got to know the different church volunteers, she asked the woman, “Why are you doing this [programme]?”

The woman almost started crying. “For seven years, God has told me to start the children’s ministry in the church,” she answered.

“They appreciated so much that there was someone to help them and to motivate them,” Priscilla related. “God showed me this [was] the right church to be at that moment.”

The kids also pressed into the ministry. Some began coming to church on Sunday and opening up to the leaders, telling them about problems at home. The leaders responded by loving them and praying for them.

“I get excited when I see kids really singing praises to God, to see them enthusiastic about God and their relationships with Him,” Priscilla shared. “And I think teaching kids about the need of reaching out to those who don’t know God yet is very important…There is this calling in the Bible: God loves everyone and wants to reach out to everyone.”

“To have them first of all know about missions—that’s one thing that is very much left aside now,” Priscilla explained. Teaching about different countries on the world map, sharing stories of missionaries, telling Bible stories about the early church—many ideas exist to mobilise the youngest church members.

“The next step is what to do, growing in faith and listening to the calling God has for them,” Priscilla said. “In the future, we would love to see some kids go into missions.”