A voice for those who have none 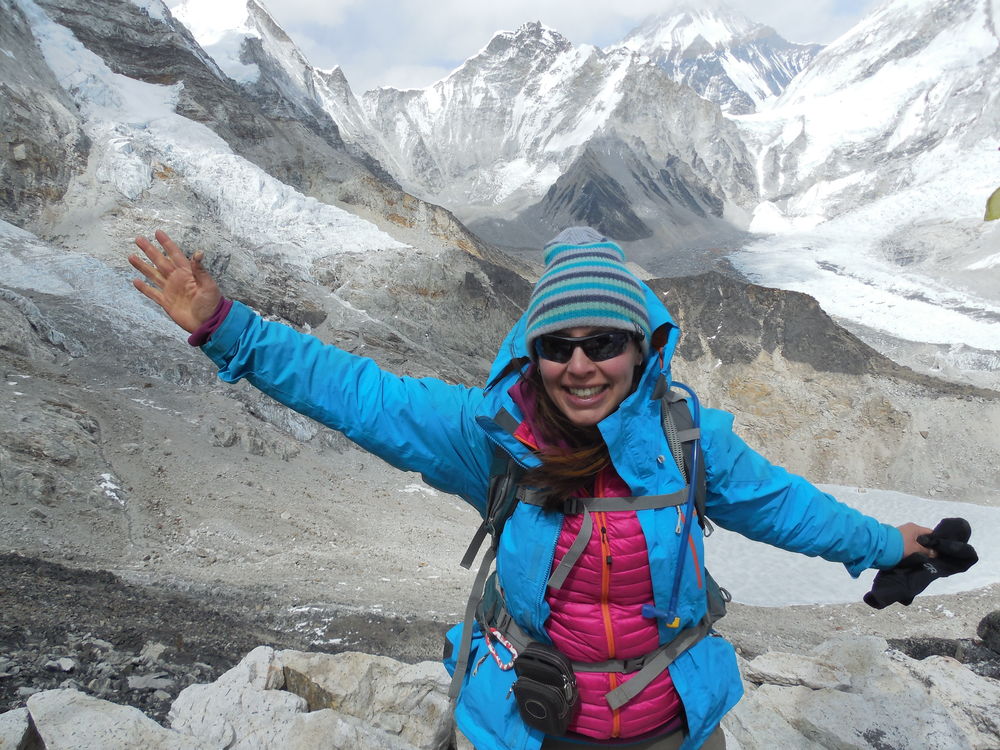 Denise Heppner was the sole Canadian to join the second Freedom Climb in 2013. Forty-five women from around the world climbed to Everest Base Camp in Nepal to raise global awareness of human trafficking. Since losing 75 lbs. preparing for the climb, she has taken on tougher physical challenges and other mountains in her own life. Denise says, “The climb has taken me far beyond the mountain.” She teaches special education teachers online at the University of Saskatchewan and is married with three children. OM writer Greg Kernaghan interviews Denise Heppner.

Denise Heppner: The Freedom Climb is not simply about climbing a mountain; it’s a symbol of the struggle that 27 million women and children face every day. It’s a voice for those who have none, a way to influence those around you to take action and address this injustice. I heard about it through an OM speaker in my church, after which my husband challenged me to do it. I thought about it all week, telling no one, until the next Sunday, when a woman turned to me and asked if I was going to Everest. I burst into tears!

GK: How do we separate the hype from the help? Similar causes seem to be more about activists than those they seek to benefit.

DH: To be frank, I thought the same at first: Is this just about me and my desire for adventure? I realised that it is not; it’s a powerful symbol of a greater issue and a way to generate action to relieve suffering and confront injustice. The mountain is a focal point, which links to the greater need of trafficked victims. And, of course, significant finance has been raised to directly help women and children in several countries already.

GK: How can you measure “awareness” and whether it is not only increasing but producing change?

DH: That’s a hard metric to establish, but I know for certain it has made a life change in me. I see how this awareness has spread in my own community. I see people around me talking and opening their eyes. And, of course, it is benefitting real people in real need.

GK: What happens if we don’t face up to injustice? If you hadn’t responded, you wouldn’t even know what you missed.

DH: If we don’t collectively stand up to injustice in the world, it grows. There are always those waiting to take advantage of those weaker than them, whether for power, profit or pleasure. Ignoring that only feeds the monster. Human trafficking is the second-largest economic activity in the world, after drugs. It will increase and overtake drugs, because you can sell the same human being over and over again, whereas with drugs, you sell it once and your product is gone. Turning a blind eye to this, as individuals and churches, says that we think this is acceptable.

To other parents and our churches, I would confess that at one point I wasn’t aware of this problem, nor its magnitude. I lived happily in my own little bubble of kids and laundry and dinners on the table. But God opened that door and what I saw was scary. We must open ourselves to what God wants to show us. Trafficking, by the way, is not something that only happens on the other side of the planet; it’s happening in Canada and even in our own communities. There are 30,000 young girls trafficked every year in Canada alone – not so much through kidnapping but by being wooed by pimps with attention and gifts to the point of being indebted to them. By then you are their object to be sold, used, discarded. Parents and children need to become aware and wise to this evil. We need to pray against it. We also need to pray for those in society from abusive backgrounds that have come to see this evil as OK – what has happened to their soul that they can live like this?

GK: Isn’t this really a justice issue? It’s noble to help an individual but, unless the structures that create injustice are challenged in a way that changes the rules to make a better future possible, what’s the point?

DH: Without question, we need to engage in the long fight to eradicate this evil in societies. But, as with other slavery, this takes time and commitment at state levels as well. Right now, it’s as if we are snatching babies from the river: It’s absolutely necessary, but we need to push upstream and stop what causes them to be tossed into the river. In the meantime, millions of victims desperately need our help to survive and to see real change in their own lives.

MP Joy Smith (MB) is pushing for Canada to adopt what is known as the Nordic model (which prosecutes clients and pimps and sees prostitutes as victims rather than criminals). Many Christians don’t realise the reality of a prostitute’s life: the beatings, the fear, the drugs, the bondage, the helplessness. If they did, they would have more compassion toward them and more resolve to see things change. The Swedish and Norwegian governments have intercepted communications between traffickers who have come to see those countries as “bad for business”.

GK: In what ways can ordinary Christians effect legal/social change on behalf of those with no voice?

DH: See it as a journey of awareness. Such a huge issue takes time to comprehend. In the beginning, numbers like 27 million (victims) made me glaze over: What could I as an individual possibly hope to accomplish? But if I can work and pray and exert myself to help one single person, that will make a difference. That ideology has released me to make an impact on a greater scale in raising awareness and funds for the cause.

A 12-year-old girl from our community, Rhiannon Bowes, heard of the Freedom Climb and phoned OM Canada to inquire as to how much it would cost to save the life on one child from trafficking. They told her that $1,900 CAD would bring that child out of slavery and into counselling and education for a fresh start in life. She thought, “How can I go to bed at night and think of what I will wear in the morning, while this other child lies there wondering if she’ll be alive in the morning, or of how many men she will have to service in order to eat?” So she set out to save that one life. She had a bake sale, a prayer walk, a bottle drive, and raised $3,800 CAD – enough to save two children. This she did at age 12. What might we as adults accomplish through her example?

GK: Tell us an example of someone who has been directly helped by Freedom Climb.

DH: OM in Moldova offered Christina the opportunity to do a small business training course. After this, she opened a small bee-keeping enterprise and earns enough to support her family while having a positive presence in her community. In Zambia, a 21-year-old from our church is part of the Freedom team. Along with three other women, she runs the Tabitha Skills Development programme, which provides women the skills in sewing and other work to earn a livable income for their families. Some of the women are escaping from the sex trade and others are clearly at risk. Actually, many women are at risk because there is no other work available; they are widowed or abandoned or have extra financial burdens to carry. Projects like Tabitha are thus both redemptive for those freed from slavery, and preventative for those at risk.

GK: How has embracing this cause changed your experience of God?

DH: Obedience is the most apparent. At first, I didn’t feel I was capable of the Freedom Climb and the changes it would bring – it was clearly out of my comfort zone. But I have learnt that, if I do what He asks, God will bring something good out of it. I am actively listening for His word to me. When we learn to have Him as our sole priority, He can make anything possible.

Some people think that a Christian’s life is boring and full of rules. That’s not my experience. If you follow Him, life is exciting and challenging and above all, purposeful. You can’t get that anywhere else.

The more I get involved with the plight of other women, the more we discover we have in common. Our pasts may be checkered with sexual abuse, substance abuse, low self-esteem and more. Many girls coming out of trafficking are so crushed and broken that they return to it, convinced that it is all they can hope to become. The only path to redemption and self-worth for anyone is through Jesus Christ. That is an unstoppable hope.

To mothers like me, I encourage to you start somewhere: Have a bake sale; speak up in your church. Your whole family will learn from this. My own children are evaluating their needs and possessions with the concern for those less fortunate. There are many local organisations you can support that are advancing this cause. Email me! I’ll get you started. I have tasks for you.

GK: What’s your dream in all this?

DH: My dream is that trafficking would become history. Until that happens, I notice that my concern for the welfare of the weak and powerless and hidden opens my eyes to how I treat those around me. This I wish for all of us: to treat life as a gift and share it.

“Speak up for those who cannot speak for themselves, for the rights of all who are destitute. Speak up and judge fairly; defend the rights of the poor and needy.”  – Proverbs 31:8-9 (NIV)