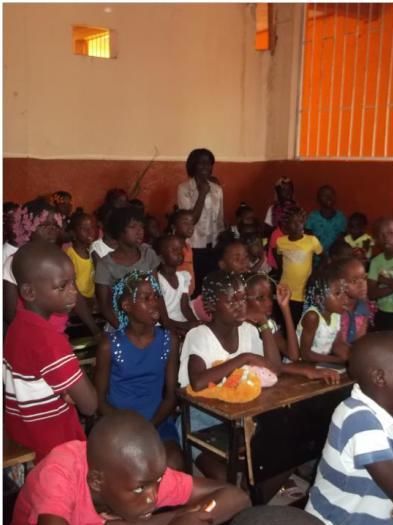 Most of the children living near the OM base in Luanda, Angola, are accustomed to taking care of the other children in their homes, from as early as age three, while their mother and father work.

It’s not uncommon to see kids as young as five in front of piles of dirty dishes, doing the washing, making the food or cleaning the house. Many are not asked to do this but instead told to do it, and told to keep quiet and behave in a way that benefits their parents and doesn’t bother them.

During the Easter weekend, Joan Van Der Merwe, the wife of the OM Angola leader, was sharing with the kids about forgiveness by telling them a story:

A grandmother gave a book to her granddaughter because she knew she loved reading. The girl’s best friend asked if she could borrow the book, saying she would return it the next day. She did, but the book was torn, missing some pages, scribbled on and stamped with a muddy footprint. How could she do that? Wasn’t this her best friend?

Joan asked the children what they thought the granddaughter should do in the situation. Should she stop being friends with the girl? Should she forgive her? Most of the children said that she should stop being friends with her; others said that the girl did not deserve to be a best friend in the first place; and some even said that she should tell the girl what she thought of her and then tell everyone at school what she had done.

Joan was shocked at first by how they responded to the story but then realised the honesty of the children’s answers, which were so different from the often-phony response given by adults: “She should forgive her. I’d forgive her.”

Joan was heartbroken by the children’s reactions, knowing that many of them grow up hating their own families. She prayed, “Lord, help me to be as honest as a child.”

OM Angola disciples people in their faith to become effective in ministry. When asked what stood out the most to her in training, one student responded, “For the first time in my life, I am being asked every day not just questions but also how am I doing! Sometimes I’m asked even more than once! Nobody ever had asked me that before!”

Joan uses a prayer from the book Kisses from Katie, written by American missionary Katie J. Davis, to keep her heart right as she works with the local children. She invites us to do the same as we reach out to hurting people, especially children:

“Help me to hurt, not just a little, but the way You hurt, Lord, When Your children are overlooked and perishing. Help me to never be too busy or too comfortable to remember the people who suffer. Help me to never stop desiring to do something about it. Lord, help us to remember, that as the body of Christ, this is our responsibility.”