Hope amidst desperation: How the Syrian War changed OM’s ministry in the Near East 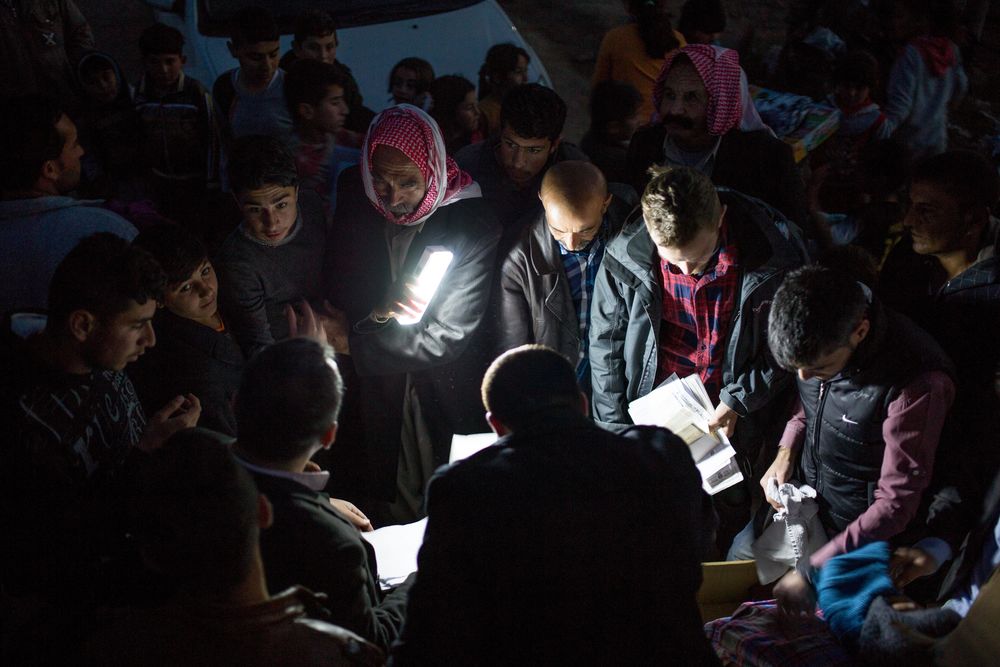 “When I was first a believer, I was thinking how my people can hear about Jesus. In the end, they came to me,” said Ibrahim*, a Syrian Muslim background believer (MBB) serving with OM in the Near East.

Since the start of Syria’s civil war in 2011, millions of people have fled. The UN Refugee Agency (UNHCR) reported 4.8 million refugees registered in other countries, with 2.1 million Syrians registered in Egypt, Iraq, Jordan and Lebanon, 2.7 million in Turkey, and over 29,000 in North Africa (18 Sept 2016).

But this exodus, birthed from desperation, has allowed Syrian Muslims to hear the gospel, many for the first time.

“People that hadn’t received the gospel for generation after generation…suddenly were right next to us. And the incredible change we found is that these people were so open, not only to have a visit or to receive a food pack but to actually sit down and ask questions,” explained Ethan*, a long-term OM worker and former OM Near East Field Leader.

“Syria’s civil war, in combination with the Iraqi crisis, has totally upended and impacted the countries in which we serve (Syria, Iraq, Jordan, Lebanon). The refugee crisis has put [us] in contact with many Muslims who…are asking many questions and are open for change,” stated OM Near East Field Leader Lane*. “It’s helped us to truly partner with local churches where we’ve had relationships for years…both in relief and development programmes and in providing training.”

Ministry in response to the war

Over the past five years, OM has partnered with over 40 churches in the Near East to meet needs of internally displaced people and refugees. In 2015 alone, OM’s Syrian and Iraqi relief fund distributed $3.2 million US, with over $1.8 million US going directly to aid, relief and development projects inside Syria.

Each project supported by the fund adheres to four core principles: providing local and relationally based assistance, working with local believers and building their capacity, helping people of all religious and ethnic backgrounds without condition, and maintaining a long-term view of the growth of indigenous communities of Jesus followers.

Besides financially supporting relief projects, OM has mobilised workers to reach out to displaced Syrians in Northern Iraq, Lebanon, Jordan and Turkey. “[We] listen and pray with people, share the gospel… and say, ‘We’re here to love you because God loves you. God has not forgotten you,’” Ethan summarised.

Linda*, a long-term worker who has served among Syrians in the Near East and Turkey, said, “There is so much openness for Muslims to study the Bible doing the DBS (Discovery Bible Study) method. I find it amazing. Syrians’ hearts have been prepared and opened by God for such a time as this,” she emphasised.

Changed lives in the midst of the war

“Through the war, people came [to the Near East] and had the chance to hear about Jesus. My uncle came here; he heard about Jesus and now he’s back in Syria. This happened to lots of people—they’ve had opportunities to hear they wouldn’t have had otherwise,” stated Freddy*, a Syrian MBB partnering with OM in church planting in the Near East.

Thirty years ago, OM workers in the Near East had not heard of Syrian MBBs, Ethan said. Now, in the neighbourhood surrounding one major city, he estimated there are nearly 600 small group Bible studies among Muslims, mostly Syrian.

“When we lived in Syria, we found that people were very nice…but weren’t spiritually interested at all,” he described. “Then Syria’s civil war happened, and we found many people incredibly open…to find out about Jesus, [and] why these Christians or Muslim-background believers are reaching out to them in love with no strings attached. What we’re discovering now is this massive interest. If you look at a history of what’s happened in the Church since the coming of Islam, there has not been a movement to this degree—where we’re talking of thousands and thousands—in this part of the world for 1,000 years,” he continued. “To watch what God’s doing now is truly remarkable.”

The crisis in Syria “has given the Church much greater experience working with Muslims and more vision. Churches are coming to us, asking to be equipped,” Lane stated. “A more equipped church means more people…bringing the gospel to more places.”

Long-term worker Renee* spent three years in Syria before the war. Now, she serves alongside Ibrahim and Freddy. “In Syria, we were focusing on just seeing one person be vaguely open, seeing one person come to faith but, with what’s happened, the vision’s much broader. Our expectations for what God’s doing have changed,” she explained. Her focus has expanded from “an individual [to] working through an MBB to a community to mobilising them to be co-workers [in ministry].”

Ibrahim hopes to see many more Syrians come to faith so that, when the war ends and they return to Syria, they can “testify about Jesus to their family members, to their cities, to their towns.”

Nicole James is a journalist, ESL teacher and adventurer. As a writer for OM Middle East North Africa, she’s passionate about publishing the stories of God’s works among the nations, telling people about the wonderful things He is doing in the world.