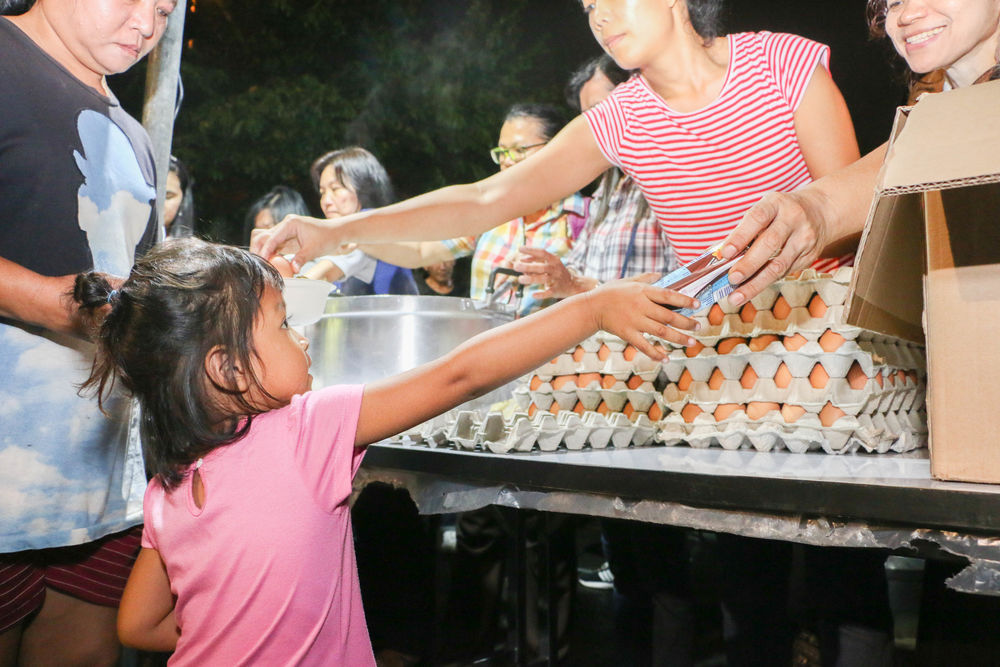 Hualamphong Train Station in Bangkok, Thailand, is a common place for the city’s homeless people to gather. On the streets for various reasons, many of the people seeking shelter under the station’s sprawling arches have lost hope and are in need—both physically and spiritually.

Each week, an OM team, along with volunteers from up to 10 churches in the city, visits the busy transit hub to bring aid to the homeless people living there.

Volunteers handed out water bottles labelled “The Living Water” as well as clothing and hot meals. Just as Jesus gave freely, so the team offered the clothing, food and water bottles without cost; below the barcode on each water bottle, a message read, “Not for sale, Jesus paid the price.”

Dr. Daniel, a church member from Texas, shared his testimony with the crowd. He described how he used to seek fame; he became a physician, was wealthy and seemed to live a perfect life. Despite accomplishing his goals, he said he felt empty and contemplated committing suicide by jumping from his apartment building. In that dark time, Daniel recalled meeting God, who changed his life. Now, Daniel told the crowd, he seeks God and wants to serve His purpose by serving others.

During Daniel’s testimony, passers-by joined the homeless people to listen. One of them was Pa Keng, a woman in her early 60s. Interested, she stayed for the whole programme and spoke with an OM worker afterwards.

“Are you here for a merit offering?” Pa King asked. According to her Buddhist beliefs, giving is an act necessary in order to receive righteousness and luck. The OMer told Pa King that the team gave help to the homeless people “to worship God. God isn’t just someone to look up to, but to have a relationship [with]. He lives in our spirit. He is our maker who has a purpose for us.”

Pa Kang said that she used to go to a church every once in a while in her hometown. The OM team invited her to attend one of the partnering churches.

Please continue to pray for the ministry, that both the homeless people gathered and those passing by, will hear the gospel and know the truth. Pray also for Pa Keng, that she will seek a personal relationship with Christ