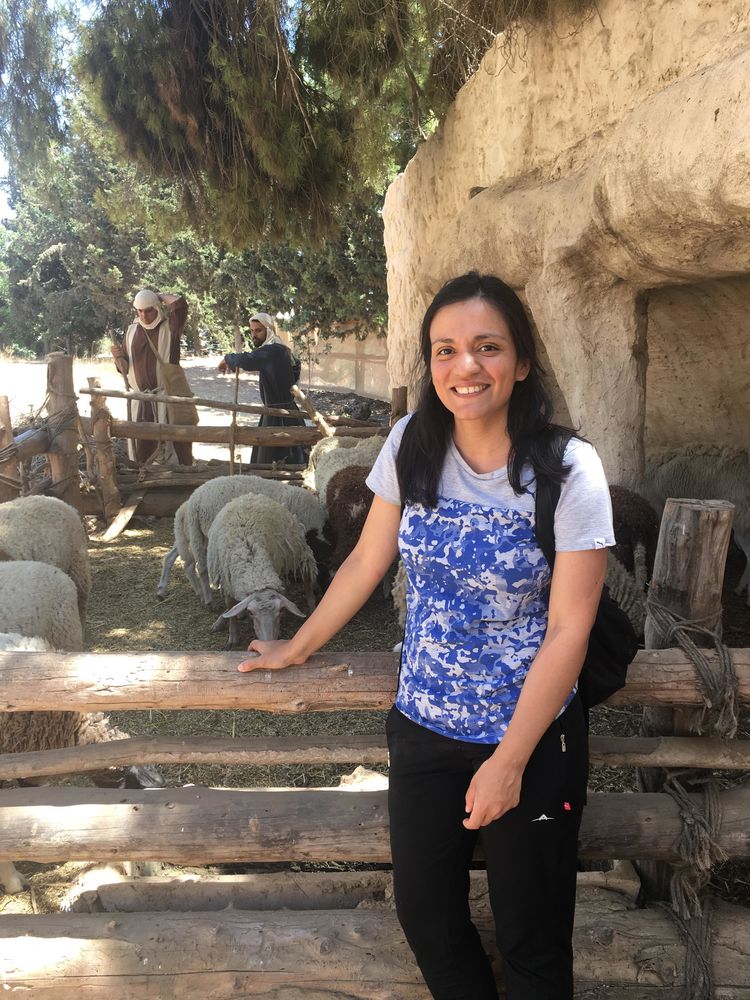 Marcela, age 34, from Longchamps, Argentina had wanted to go to Israel ever since she was a teenager. In preparation, seven years ago, she started studying Hebrew. When her classes ended, she continued to dream about Israel, even finding friends in the Jewish community in Buenos Aires.

Then she discovered a 26-day mission trip to Israel with OM.

As an industrial engineer, years ago Marcela offered her holidays to God. Instead of vacations, she goes on mission trips. “Every year, I plan the next mission trip. It’s not a sacrifice for me; it’s really a special thing in my relationship with God. I enjoy going on holidays, but I enjoy doing mission trips more,” Marcela said.

Marcela has been on mission trips to other provinces in Argentina, but this year she felt she was supposed to serve in a foreign country. Then she found out about a short-term trip to Israel with OM. She’d known about OM for about two years, having first heard about it at a summer camp in Cordoba. She saw an OM stand and got some literature for children, which she used at her ministry in children’s hospitals in Buenos Aires. So when she heard of the trip to Israel, this was her first choice.

Then the time came—to see her dream of going to Israel come true. But even better than a vacation, Marcela's trip allowed her to share the gospel in the very land where Jesus lived, died and rose again.

“It was so wonderful to be where Jesus was, where He lived.” Marcela remembered. She especially enjoyed being in places mentioned in the Bible. “I felt something very special there.”

Her team, made up of people from 10 different countries, mainly focused on evangelism. They had a lot of conversations, which was initially difficult for Marcela. “It was my first time sharing the gospel in English, and I didn’t remember it all at first. But I had wise leaders, who showed me a good way to do it, and I got to where I could do it on my own. It was weird at the beginning, I got scared sometimes, but it was really exciting at the same time.”

She was also surprised by being able to interact with both Jewish and Muslim people. “Before the trip, I only thought about Jewish people in Israel. I only pictured speaking with Jewish people, but during the trip I was able to talk with people from both religions, and that was a beautiful thing.”

One day, Marcela and a teammate met up with a woman named Farah*. They talked for over an hour, first about her studies, then about life, and finally religion. Farah told them that she didn’t consider herself a religious person, even though she practiced the traditions of her family, because culturally she is Muslim.

“She said she didn’t have a chance to choose her religion,” Marcela remembered. “Then she asked about our experiences, because she thought we didn’t have a choice, either. So we got to explain our faith: how one day we heard about Jesus and our lives changed. Then I shared my testimony with Farah about how I was born in a religious family, too. I told her about how as a child, I didn’t believe in God, but my grandmother always told me about Jesus. And one day, I felt alone and sad. I’d been betrayed by one of my best friends, and in that moment, I remembered everything my grandmother told me about Jesus. In that moment, I started a relationship with Him, and have never felt alone again.”

When she finished sharing her testimony, Marcela noticed Farah’s face changing. She agreed with them that there was a difference between a religion and a relationship with God. Marcela’s teammate offered to send her more information about Jesus, and Farah gave them her contact information. “I loved this conversation,” Marcela reflected, “because I could see how this lady could understand the difference, and I realised many Muslim people are searching for God, searching to live in a right way.”

Even though Marcela grew in her ability to share the gospel in English, one day God surprised her by leading her to an Argentinian woman—in Israel! Ana* only spoke Hebrew and Spanish. Marcela was able to talk with her about the gospel in her own language. “I was really happy,” Marcela shared, “because that day I needed to speak in Spanish with someone. I felt like that day was a gift of God. I was able to share with her about the gospel and Jesus. Ana told me she had two Messianic Jewish friends, and that she knew how difficult it was for one of her friends to become a Christian. This friend was from an Orthodox family, and it caused a big problem when she converted. She also knows what it means that Jesus is the Messiah; she knows what happens when someone accepts Christ. We were able to pray for her and give her a New Testament.”

Now back from her trip, Marcela says her time in Israel taught her complete dependence on God. “It was my first time sharing the gospel in English, and I also didn’t know anything about the culture. Everything was new for me. I learned to be more humble because I had to depend on God for everything.

In Argentina, because I know the language and culture, there have been times I could have relied on myself. But in Israel, I had nothing but Him. If I didn’t ask for the guidance of the Holy Spirit, I didn’t have anything. I want to be humble like Jesus.”

As for future mission trips, Marcela is praying about where she will go next year. For now, she is focusing on sharing the gospel in her local community, in the children’s hospital and with her colleagues at work. Prayer has also become a huge ministry for her. “I like praying for Israel and I think it is part of the mission too—praying for others who are in other countries and provinces doing the will of God. I’m still in contact with workers from Israel, asking how I can pray for what God is doing there.”

Marcela might have returned from Israel, but her impact there continues.