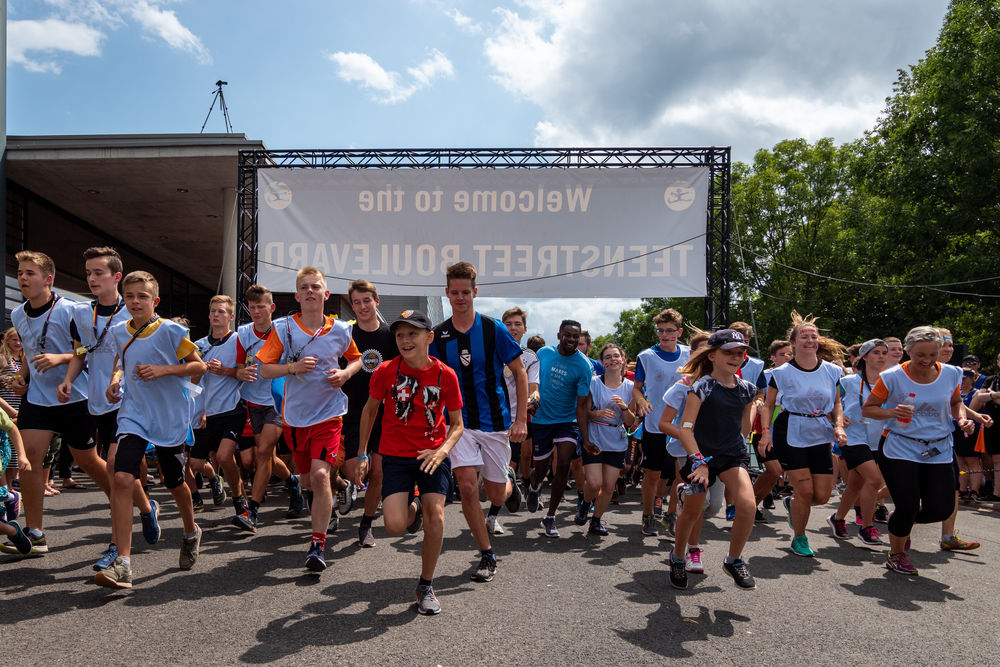 The sun was shining as the TeenStreet Boulevard turned into a festive area where runners and supporters blended into a colourful palette. Some were wearing wigs, hats or crazy costumes, others were wrapped in flags. It was time for the Raise And Give (RAG) race.

Five...four...three...two...one...GOOO! To the soundtrack of hundreds of people clapping their hands, singing and cheering, over 1,200 runners were free to set off, and the DJ added some extra value to the atmosphere as he started to pump music in encouragement.

The runners–and walkers–had two hours to finish as many laps as possible. A surprising number of runners persevered the entire two hours. One of them was Miranda (15, Sweden), who ran 24 laps, raising six euros per lap. She pushed herself to the limit: “I got stressed out and tried to go faster in order to run as many laps as possible. My legs started to hurt,” she reported. Another teen who just kept running was Peter (13, Germany). Thanks to the cheering, he managed to run: “something like 20 laps.”

Three Belgian girls dressed like bananas walked for two hours. “God pulled us through!” Lonit (17) exclaimed with a smile. “Here I am in a banana suit running in circles and raising money.” Lonit and her friends Joske (17) and Sarah-Beth (17) were amazed by the support from the crowd: “There were little kids hugging us and supporting us.”

Many teams were involved in organising RAG day. Apart from the RAG team, the sports team, medical team and security team played important roles to make sure that everything worked out well. According to the sports team, everything went smoothly–although it was stressful in the beginning, with many runners being eager to get their badges scanned to register their first lap.

One new requirement was to make sure that the runners were wearing proper shoes in order to reduce the risk of injuries and blisters. This clearly paid off, according to the medical team. The entire team–10 nurses, 11 paramedics and two doctors–were on duty during the race and they had prepared carefully, both practically and prayerfully. After the race, they reported that only 20 patients needed medical care during the two hours, and none of these suffered from any severe injuries.

This year, the money raised goes to refugee teenagers and children in Greece, Italy and Serbia, providing them with backpacks, stationery and books, besides sports and art equipment. What is new is that 20 per cent of the money goes to support new TeenStreets in other parts of the world. That way, anyone raising money or giving money themselves is involved in helping young people in the name of Christ.