Natalie serves the mobilization team in the Caribbean from her couch in Michigan.

As a sophomore in college, “I thought for sure God was going to call me to overseas missions,” said Natalie Down, a Michigan-based mother of two. But with an English major, her career trajectory didn’t fit the traditional mission’s role she envisioned. “Do I need to change my major? Learn a foreign language?” she wondered.

Researching the answers to these questions, Natalie found OM—and, listed among opportunities to serve, communications roles. “That’s what I wanted to do: I wanted to write,” she explained. “I thought it was really cool that you didn’t have to be a pastor or church planter to be a missionary.”

Though she was eager to serve, Natalie didn’t apply to OM right away. Instead, she went home for the summer, met her husband, and, eventually, married him and settled into suburban life. She worked as a legal writer for an immigration group for a year and a half until her first daughter, Lucy, was born. “When Lucy was about four months old, I watched a video of unreached people groups, and it reminded me of this burden I had in college,” Natalie shared.

Then she remembered OM.

She went to OM’s website, clicked on the communications section, and the first ad that popped up was the communications facilitator for the Caribbean. “It had writing stuff, it had graphic design, it was part-time, it was virtual,” she recalled. For the stay-at-home-mom, it seemed like a perfect fit.

Still, when Natalie had first thought about participating in missions, she wanted to go to Asia or Africa, not stay in Michigan. And she certainly didn’t picture missions involving the islands she knew as the US’s closest tropical holiday destination.

During video conferencing calls with the leader of OM’s work in the Caribbean as part of her application process, Natalie began to understand the region’s mobilization potential. “The Caribbean has a rich Christian background, but a lot of people there don’t think it’s their responsibility to go,” she explained.

Among the many committed Jesus followers living in the islands, “there are also many highly qualified people in a variety of skills,” said Nichola Henry from Jamaica, who serves as one of OM’s leaders in the Caribbean. “We want people to know that these skills are also needed in missions and are often in short supply.” 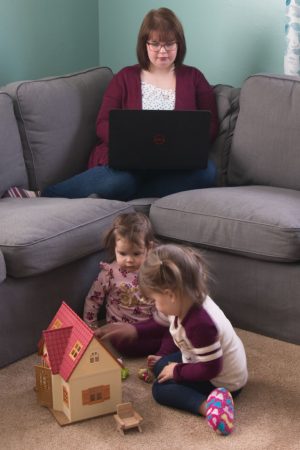 The team quickly welcomed Natalie on board, and she began doing a “bunch of little things” to support their communications efforts: running their Facebook page, writing newsletters, compiling financial reports, designing posters. Recently, she created an advertisement for a missions Zoom meeting the team was hosting.

“Flexibility and commitment to meeting deadlines are very important” for anyone interested in serving remotely, Nichola said. Though Natalie completes her tasks over scattered hours, squeezing in work when her kids are napping or after they go to bed, she’s excited for the little part of missions God’s given her. “I’m thankful I get to have a small role in people going and people sharing the gospel with other people,” she said.

“God really can use you, the gifts and abilities He’s given you, right where you are. I thought I had to go, had to have this super spiritual gift, that missionaries were a pastor or a church planter, but I can be part of God’s call for missions on my couch in Garden City, Michigan, making a poster that’s calling people to go.”

Start Where You Are, Give What You Have
Long Term Missionary or Staff/Short Term, Interns, Volunteers/Europe/Training/Discipleship
“Two things really helped me grow,” says Oxana Marchitan. “Experiencing God’s provision when circumstances were desperate; and being challenge...
More About starting now, even if you don't feel equipped »

Knocking on Doors
Short Term, Interns, Volunteers/Take Your Job to the World/Europe/Training/Discipleship
“TeenStreet was such a special time for me as a teen that I came back year after year wanting other teens to have the same experience.” ...
More About translating for the TeenStreet conference »

It Began With a Simple Vision Trip
Short Term, Interns, Volunteers/Middle East & North Africa/Church/Evangelism
The ministry reach of this church is being felt across the world, and it all began with a pastor’s Vision Trip.
More About impactful mission trips »