A Blessing to the World 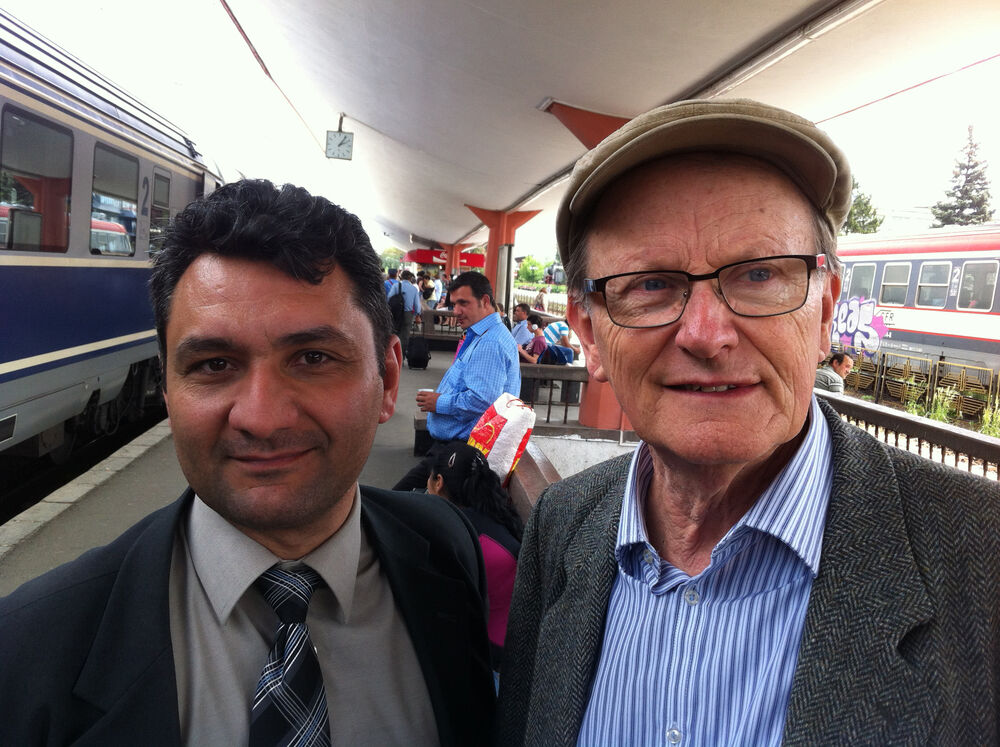 Rafael Năstase of Romania walked into a church as a young man because he wanted to find out why the Christians he had met were happier than he was. He had a university education, and believed he was smarter than the Christians around him - many of whom had received only a modest education. But why were they happier than Rafael? Besides, Rafael found the church-going young women attractive. They seemed “more pure and more honest” than the ones he had met at the university.

Three months later Rafael had learned enough about Christianity and was ready to receive Jesus as his Saviour. As a “bonus”, God gave him a girlfriend named Alice who later became Rafael’s wife.

In the year of 1996, a Love Europe team visited Rafael’s church. Alice was already familiar with OM’s summer campaigns, and asked Rafael to help with the visiting team. A year later in 1997, Rafael was asked to lead an international summer outreach team, a fact which still amuses him.

“They were either crazy or simply decided to take a huge risk”, he laughs. “I was a new Christian and I didn’t speak English. Who was I to lead an international team?”

Risky or not, leading the team changed Rafael.

“I’m not sure what I did this summer, but I want to do the same for the rest of my life”, he told Alice when they met after the outreach. “In that case, we need to get married”, she declared and planted a kiss on Rafael’s mouth. “I want to be a missionary too.”

Next year the young couple took part in a missions training program, and started praying about the future. “We were ready to go anywhere”, Rafael remembers. “Africa, India, anywhere but Moldova.” Moldova, they thought, was ”too close, too conservative, and too legalistic”.

Yet Moldova was exactly where they were sent for their required two-week outreach.

“We’ll survive two weeks anywhere”, Rafael and Alice promised each other as they packed warm clothes in their bags. It was November and Moldova was having an unusually cold winter.

During the two-week outreach God changed Rafael and Alice’s hearts and minds and they began to realize they were falling in love with their neighbouring country and its people. A few years later the Năstases returned to Moldova as OM missionaries, and stayed there for seven years.

When Rafael and Alice’s time in Moldova was drawing to a close they started praying about their future once more. They dreamed of working in Afghanistan, but wanted to stay open to other options as well. “We were praying the anywhere but prayer again”, Rafael recalls. “This time we added Romania at the end of the prayer – anywhere but Romania.”

God has a great sense of humor, and the Năstases made the decision to return to Romania in 2007. The leadership of OM Romania was going through a change, and Rafael was asked to come back to help. He later became the field leader of OM Romania, a position he still holds.

Around the time of the move Rafael was given a DVD that talked about Christianity in Romania.

“I learned that the Romanian church is one of the largest ones in Europe”, he explains. “I realized that we could be a blessing to the world. We could start sending missionaries to other countries, and get involved in world missions.”

The return to Romania was not easy. OM Romania was in the middle of a financial crisis, and didn’t have the money to even pay for the heating of their office building. The temperature outside was -20 degrees Celsius; and giving the office staff woolen mittens was of no use. A decision was made to move the team to a rental apartment. It was cheaper to rent a small apartment than to heat the old building. It took two years before the team was able to return to their building. Today the OM property has had a nearly complete face lift, and can accommodate 15-20 short termers at a time.

In 2015 OM Romania’s most critical need will be new staff.

“We would like to add one or two fulltime members to our team”, Rafael says. “The most immediate need we have is for someone to coordinate our sports ministry.”

OM Romania runs several sports clubs that have enabled over 200 children and youth to learn about God’s love. Several have had their lives changed radically.

Rafael Năstase would like to see young Romanians grow in their faith and get involved in ministry either within Romania or around the world. For the past two years he has been meeting about 20 young mission enthusiasts every week. Together they study the word of God and take part in short term projects. “The church of Romania has its foundations in tradition”, Rafael explains. “We need people who speak the language of today’s teenagers and understand where they come from.”

There is a need for similar missions groups as this one all around the country. OM Romania is currently looking for someone to work full-time in missions education, teaching young Romanian Christians what it means to follow Jesus.

“Anyone can come!” Rafael says. “Romanian is a very easy language. You can learn it in three months.”

In the centre of OM Romania’s work is the idea of transforming communities. Rafael talks about Christian dentists who bring their skills and equipment into rural Roma villages – free of charge – and serve people by helping them in a very practical way. International teams have accompanied local dentists, too.

OM Romania is also putting together a network of Christian doctors. Many have “complained” that “only the dentists are allowed to serve the poor”, offering their time and skills to be used alongside the dental clinics.

For the poor, ostracised Romas the arrival of the Christian doctors is a miracle. While health care should be free of charge in Romania, in reality doctors require “extra” for their services and one cannot see a doctor without money. Because of this kind of corruption, locally-available and free health care is a source of surprise and joy in the Roma communities.

“Why do these Christians want to help us?” they ask and many follow the visitors to church to find out why they are different – much like Rafael himself over twenty years ago.