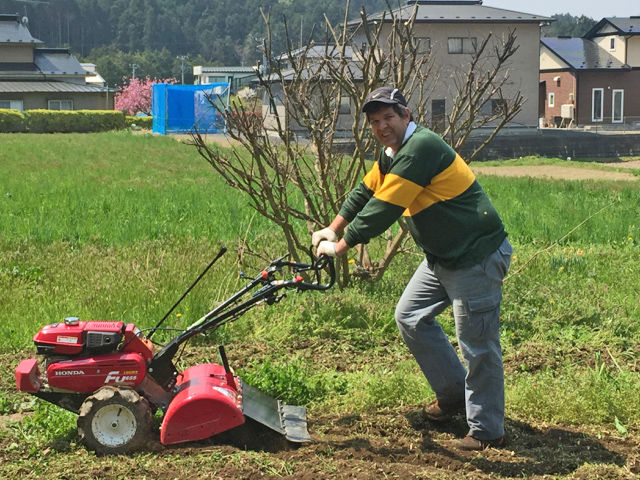 Do we still believe that God is the Lord of the harvest? If this is true, then we might look at Japan, and ask ourselves, “But where is the harvest?” Although there are small signs of increased interest in Christianity, it is still far from what we can call a great harvest! We can only trust that the Lord will bring in the harvest in His time. Our role is to be faithful labourers, preparing the ground and sowing the seed. The rest we have to leave in His hands. —Stephan Smithdorff (Leader of OM Japan’s team in Miyagi)

Just over two years ago, the Smithdorff family (South Africa/Japan) moved from Kanazawa to Tome, Miyagi. They started the OM Miyagi team, which is now locally known as the 4 Friends Network, with the goal of helping and reaching out to the tsunami affected people. The house they are renting has a big field and one of the first things they did after they moved in was to prepare a vegetable garden.

Using only a spade, it took Stephan a very long time to prepare only a small patch. So in the following year he was smarter and borrowed a friend's tilling machine. What a difference it made! Stephan said, “As I worked the ground, I realized that in many ways our first two years here in Miyagi has been like preparing the spiritual ground.”

Since they arrived in Miyagi, the family has met many new people and they could see how God is slowly preparing their hearts for His work.

Their teammate, Lee Sin from Malaysia, met a lady at a local café. She and her husband were the café owners. Slowly the whole team became good friends with them. When Pastor Shindo, a former Yakuza (member of the Japanese Mafia), came to Miyagi to speak, the team invited the café owner to the meeting. She really enjoyed it! On his next visit to Miyagi, she offered to organise an event for Pastor Shindo in Tome and even arranged with the local town magazine to interview him and publish an article of his testimony! “Even though she is not a believer, we are amazed to see how God is preparing her and using her to spread His Name in Tome,” said Stephan.

The team also became friends with another person who recently lost his job. After that he became sick and depressed. They visited him a few times and prayed for him. He told them how much peace he felt in his heart whenever they prayed for him. Now that he is retired, he started a new hobby. He is learning woodcarving from an expert sculptor. Stephan and his team were amazed that the object he chose to carve was Jesus on the cross. During one of the visits, Stephan told him, just as he is carving away the wood, God also wants to carve away things in our lives that don't look like Jesus. He responded, “Then God has to carve away everything in my life!” “You understand the gospel very well,” Stephan replied. “We are all sinners. That is why Jesus died on the cross for the forgiveness of our sins!” The team believes God is still preparing his heart for something beautiful.

Stephan said, “Preparing the ground is not an easy task. It takes time and there are also many setbacks. But in the end, if we prepare well and plant good seed, I believe we will reap a harvest!”