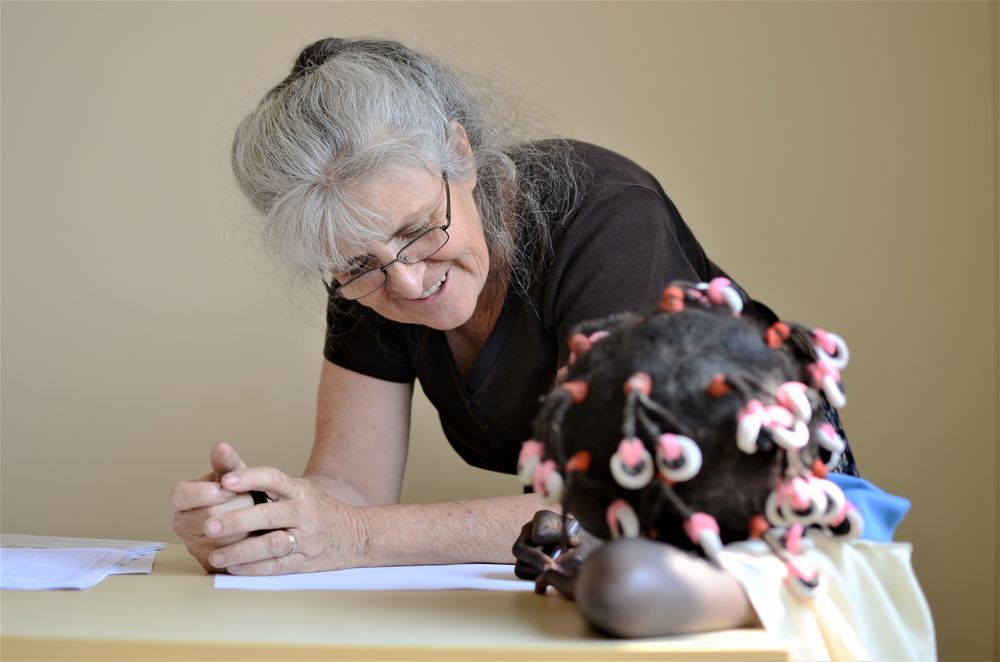 The first time OMer Joan van der Merwe (South Africa) went walking through the dirt roads between a cluster of houses in Menongue, Angola, calling for children, an oft-repeated mantra in missions work rang in her ears: “All missionaries experience culture-shock.”

When Joan and her husband, Wessel, moved to Angola more than 15 years ago, she decided not to pursue ministry related to her skills in nursing. Though she often serves friends of OM Angola whenever a medical issue requires her assistance, she does not advertise herself as a doctor.

Instead, she chose to focus on children for her ministry in Angola, and as such, she is always looking for new ways to connect with the youth of the community, bridging the gap and bringing them the gospel.

Years ago, desperate for an avenue into the lives of the Angolan children, Joan asked God what she could do to reach them.

“I felt God say, ‘Just walk through the streets and call for the children to follow you,’” she says—to which she responded as a South African would.

“I thought it was crazy,” she says. “That’s not something you can do in South Africa. I asked God why He would want me to walk around calling after children. It didn’t seem like something that could even work. But I felt God say, ‘I’m not asking you if it will work; I’m asking you to trust me and be obedient.’”

Joan decided that whatever may happen, she would obey God, so she set out into the community and called out to the children.

“It was a bit like the man who plays the flute,” she says, referencing the Pied Piper, “but fortunately I had a much better reason for getting the children to follow me.”

And follow her the children did—just a handful at first, but in growing numbers as time went on.

Now, the calling of the children happens every Saturday morning, with Children’s Clubs in three different Menongue communities near the OM Angola property. Joan has also recruited other OMers, some local believers she has discipled and the students of Wessel’s yearlong missions training course. A fourth community will add a Children’s Club as soon as a former missions training student establishes a church there.

Joan has seen firsthand the great need for children’s ministry in Angola; because of transportation costs, many parents leave their children at home on Sunday mornings and go to church by themselves. And those children who do go to church are largely ignored by pastors who focus on the adults in their congregations.

“The children in Angola are very much unevangelised,” Joan says. “We want churches to see, by our example, how to reach out to children in the community.”

On a typical Saturday morning, Joan and the students will gather the children at three separate churches, taking them through a programme designed not only to build relationships, but introduce the children to concepts like true worship, fellowship with God and hope.

“The main thing is that the children will feel valued, that God is valuing them,” Joan says. “That they can play a big role in the kingdom of God.”

The programme consists of four W’s—welcome, worship, word of God and witness—and lasts about an hour. During their time with the children, the OM team sings, plays games, and integrates biblical teaching. Unlike typical children’s programmes, however, Joan says the emphasis of the Children’s Clubs is on teaching by example.

“Children in Angola learn songs,” she says, “but they don’t learn how or why we worship God—to experience His presence. So we sing along with them, and show them what real worship looks like.”

The Children’s Clubs have allowed Joan to build relationships with families in the community as well; most Fridays, she visits the parents of the children and spends time with them, going over the Saturday morning programme. That, combined with her method of walking down streets calling for the children, has given her a chance to connect with others.

“Now, even the parents will call out if they see me walking and they need prayer,” she says.

Saturday morning clubs are just one aspect of Joan’s ministry, which also includes teaching and tutoring at local schools, visiting patients at the paediatric hospital and hosting advocacy training sessions at churches. Even so, walking through the communities and calling “vanike, vanike!” (“children, children!”) has proven to be the most effective way for Joan and the OM team to gather children for large-scale ministry.

Stepping out in faith, she says—listening to God and obeying Him, even when it seemed crazy—has opened the door for the work He is doing among the children of Angola.