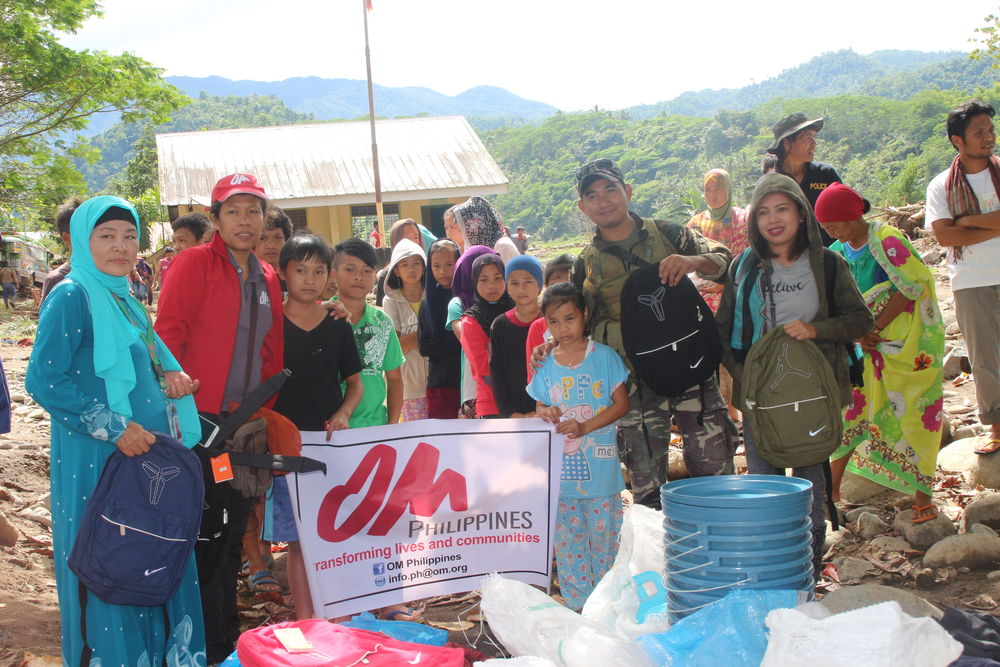 Two days before Christmas Eve, Typhoon Vinta (known internationally as Typhoon Tembin) triggered massive floods and landslides in Mindanao, southern Philippines, causing about 30,000 people to be stranded in ports or evacuation centres, while 22,000 people were moved to higher ground. Vinta was the country's 22nd tropical cyclone that year.

When asked if OM in the Philippines would respond to the need, the immediate reply was negative—all staff had already left for a well-deserved Christmas break.

However, OM Philippines Field Leader Sally Ababa could not ignore the new crisis unfolding in her hometown. Ten days later, she boarded an overnight boat with a friend from Singapore to distribute relief goods and material to various schools in Lanao del Norte, the hardest hit province in northern Mindanao.

Due to recent armed struggles in the province bordering Lanao del Norte to the southeast, the peace situation remains volatile in the area. The Marawi Crisis that started in May 2017 has since become the longest urban battle in the modern history of the Philippines, resulting in the death of more than 1,100 people, including 165 soldiers. In 2000, an all-out war against the Moro Islamic Liberation Front was also declared there.

“Typhoon Vinta was the worst disaster to hit the region in many years, paving the way for OM Philippines to reach places hardly reached by many due to the recent conflict situation and remoteness of the area,” Sally said. “Mass flooding led to the death of several children by drowning, but also the destruction of houses, schools and properties.”

In partnership with Dr. Rasmila M. Cosain, senior education programme specialist on networking and social mobilisation, and the Department of Education, OM was able to serve more than 15 schools with gallons of paint for the buildings, materials to rebuild broken structures and school supplies for over 600 students. Food supplies and kitchen utensils were also donated to 100 families in Maranding Annex, Kapatagan, Lanao del Norte in partnership with the local government and churches.

“It was a challenging feat, knowing that it happened during the Christmas holiday and we were short-handed with people, but we are grateful for the assistance of many individuals, including churches and the military,” Sally said. 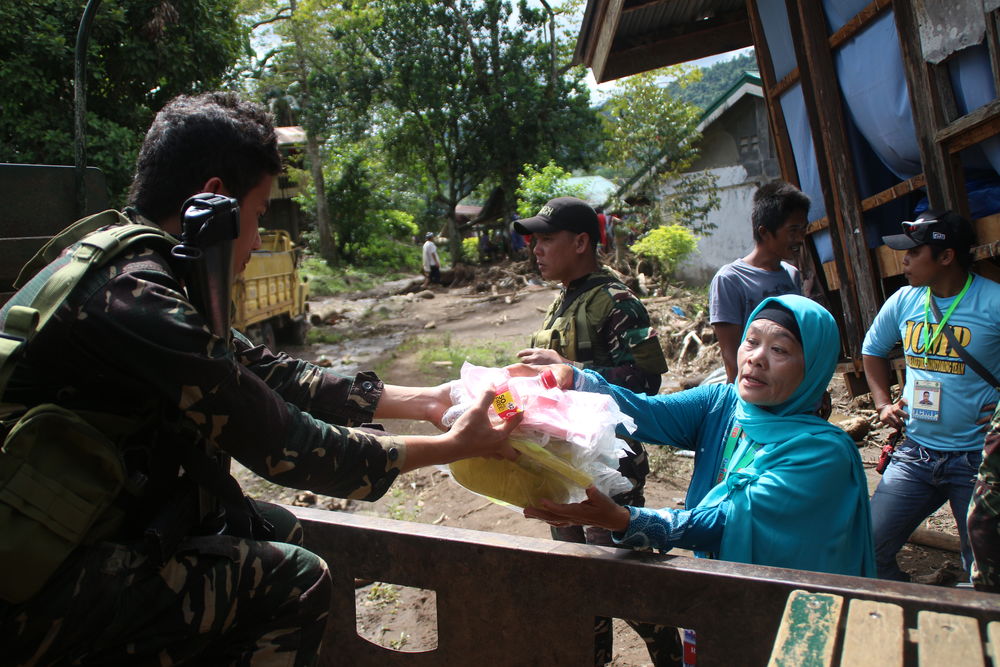 The greatest breakthrough for the OM team was the distribution of school supplies to 150 students of Munai Elementary School, in Lininding, which was totally destroyed. For anyone to enter the area, including the military, a clearance order from the Moro Islamic Liberation Front needed to be attained.

On the eve of OM Philippines’ planned distribution on 6 January 2018, the fifth Mechanized Kaagapay Battalion received clearance to accompany the team for the distribution of relief aid. “Aside from the local government unit, we were the first group to reach the place after the devastating typhoon,” Sally said.

Accompanied by 21 soldiers in three trucks, it took the OM team four hours to reach Lininding: New paths had to be created as roads had been covered in mud, and huge boulders blocked the way in many places.

“It was a lot of hard work to reach the place, and we are grateful for the support of everybody, including the villagers who came to our rescue when we got stuck,” Sally said. “Without the joint support of everybody, we could not have made it to the school. We arrived at a throng of students and adults alike, gladly receiving us into their midst, despite the great devastation surrounding them.”

It was the first time the military had reached the place in years, and future relief work could be planned accordingly. A few days later, the military returned to the village with members of the Department of Social Work and Development, bringing much-needed food relief and supplies.

Since then, OM has also sent a follow-up relief team to distribute hygiene kits in Munai, Kolambugan and the surrounding area. In addition, OM has been invited to conduct a psycho-social programme for children, following the Operation Safe curriculum used for children affected by Typhoon Yolanda (Haiyan) a few years earlier. 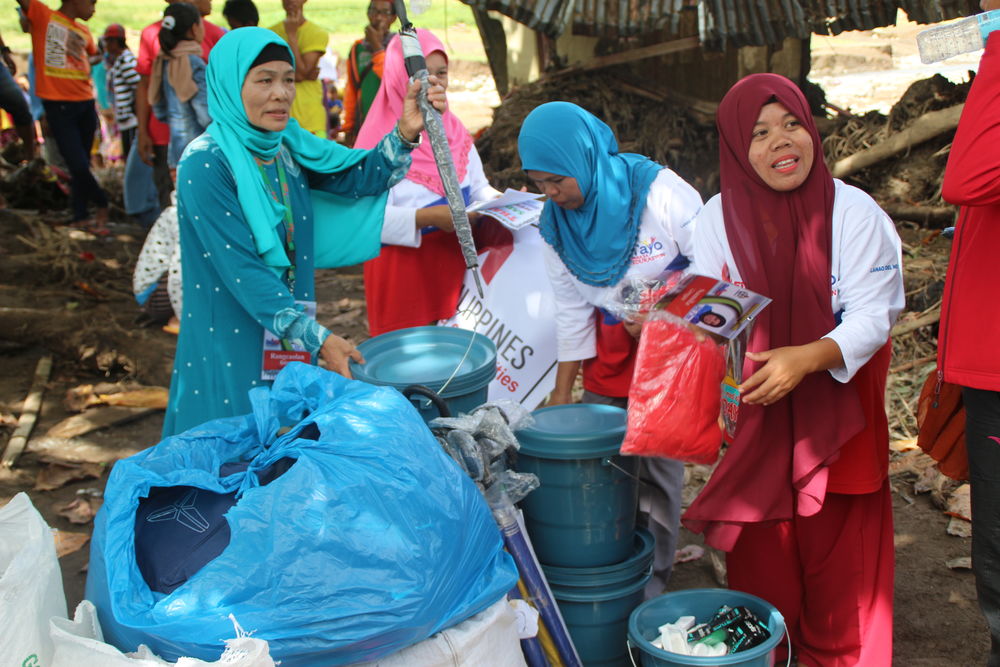 Working together for a common cause

“We could have stayed in the comfort of our offices and reasoned out that it was our holiday when the call was given to us,” Sally shared, “[but I am] grateful that we did not... because it did not only give us the opportunity to respond to a need, but it also allowed us a closer and more direct engagement with a least-reached people group [in our community].

“The show of camaraderie and solidarity of our people working together for a common cause [also] gave me great joy. Now we have a great open door to show [those affected by Typhoon Vinta] what a vibrant community of Jesus followers can do for others, regardless of circumstances.”