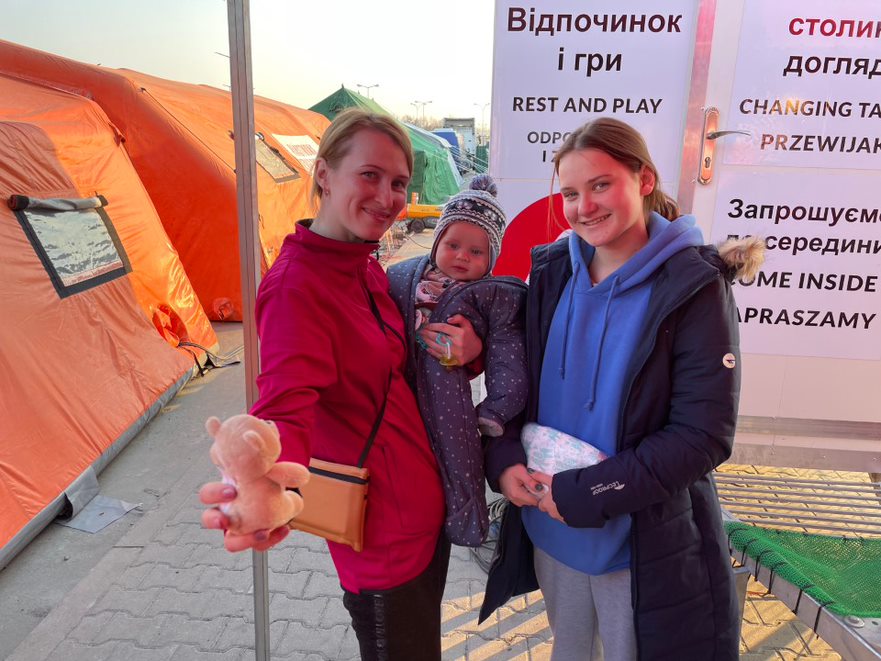 All day and late into the night, small groups of women and children and a few men make their way across the Ukrainian – Polish border. Clustered around their heavy suitcases, which carry the only earthly possessions they packed, and many with blankets wrapped tightly around their shoulders to keep warm, they seem to hurry towards a finish line.

“I’m not leaving for myself,” said Marina, a Ukrainian who just arrived at the border. “I’m leaving for her,” as she indicates her five-year-old daughter playing next to her. She left her home near the Belarus border at 5am on Saturday March 6 and travelled the width of the country to cross into Poland around 10pm that night. For many making the trip out of Ukraine, their only thoughts for most of their journey is getting to safety – fleeing the destruction or threat of bombs and missiles behind. “For over a week we lived in terror – mostly in the basement. I had to keep my daughter dressed all the time – so she couldn’t sleep well. I was constantly listening and thinking we have to flee – is a missile coming?” Marina shared. It was after the attack on the nuclear plant that she made the decision to go. At 26 years of age, she has left behind her husband, parents and relatives to take her daughter away from the risk of death.

As of March 9, almost 1.5 million people have left Ukraine for Poland, with several hundred thousand doing the same thing every day. There are many others like Marina making impossible decisions to leave everything behind in the hope of safety. And on the Polish side, the refugees are welcomed by volunteers who help escort arriving groups across the border: carrying heavy suitcases and tired children the final steps into safety. The volunteers have come to help during this crisis for a variety of reasons. Most are Polish, some from countries further away, but the rallying response seems to be that this is the time to help.

“Some Ukrainians arriving have no place to go once they get to Poland,” Weronika, OM’s country leader in Poland explained. “The government arranges for pick up for these people from the border to a welcome center where they have volunteers to help them. Others have contacts elsewhere that they are traveling to but have a long journey yet ahead – and these are the people we can help.” After the long, dangerous trips, where all they could think about was getting somewhere safe with their children, the women are exhausted and need a place to collect themselves before continuing. The OM team in Poland has set up trailers at two different border crossings to provide a safe, warm space for mothers and children to sit down, rest and eat something warm. Marina was one of these women who stayed in the OM trailer while she waited for a friend who was still in the immigration line in Ukraine.

From the border though, Ukrainians are traveling onward – wherever they have contacts or find a place to be housed for an unknown amount of time. Many of these people travel through major cities like Warsaw before traveling onwards. The OM team in Warsaw is networking and connecting generous Polish people who want to help with the urgent needs of the arriving Ukrainians. The highest need is for housing, either temporary or more permanent options. “There are many Polish people that want to help but need to be linked with the needs of the Ukrainians,” Weronika shared. “Part of our job has been to help connect them with where the needs are.” A young volunteer force makes calls every day to arrange for housing options as they pop-up; often calls come in late at night of new arrivals needing a place for a family of 5 or 6 to sleep. Even in the first week that fighting broke out, several hundred people were housed in the homes of Polish people across the country through the network that OM has developed. The OM team has launched a website as well, to help make it easier for volunteers to know how and where help is needed.

Kutno is another Polish city that already had a high Ukrainian population. Now it has many of the relatives and contacts swarming into the quiet little town. An OM church plant there, with several Ukrainian members, has become an organizing center for the community’s response to the needs of those arriving. Arek and Donna planted the church 22 years ago and are now seeing their members serve the needs of those arriving. The church itself has been repurposed as a shelter, where people drop off food, clothing and essential needs for women, children and babies. The wider local community is opening their homes to welcome Ukrainians to stay, offering a spare apartment or even squeezing their family into one bedroom to free up another room for those in need.

“Now is the time to help,” Donna said as she bustles around the church, coordinating and organizing amid the chaos. Piles of donated clothing need to be sorted, food shelves in the small donation center need to be restocked and the constant arrival and departure of new Ukrainians needing housing means there is constantly something to do. Veronika, a woman who spent a night in the church before being placed in her own apartment, left Ukraine with her mother, two-year-old daughter and 16-day-old baby boy. “What do you need in the apartment? Is anything missing?” Donna asks her during a quick visit. Despite working tirelessly for the previous eight days, Donna takes time with the women – offering them words of encouragement and helping them find what they need in the church.

Everywhere, there is a strong volunteer force working with the OM teams to house and feed people, provide transport from the border to a housing option or to another city. These believers also engage in conversation with those who have just experienced the trauma of leaving so much behind. Those fleeing have left pieces of themselves behind with their husbands, loved ones and homes – and the weight of these choices is visible on their faces. People’s practical needs are easier to meet than the emotional scars they have accumulated through the crisis unfolding in Ukraine.  “They need more than a juice pack and some snacks – anyone can provide those,” Weronika explained. “But what they really need is peace, a conversation with someone, to be seen as a human and listened to.” She and her team are working tirelessly to serve their neighbors from across the border with the respect and love they deserve.

OM teams in the countries around Ukraine are responding to the needs of those fleeing into their countries. They distribute food and essential supplies, coordinate housing options, and network with a wide array of volunteers to serve the needs of many.

Persecution, Prayer and Fasting
National/Near Culture Worker/Middle East & North Africa/Church/Evangelism
Prayer and fasting have been part of the Algerian Church’s lifestyle since the beginning of the Kabyle area revival in 1981. After two years o...
More About God's faithfulness in the hard times »